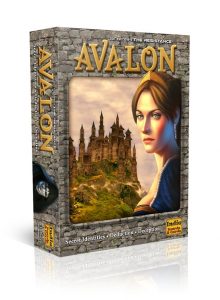 What it is: “Easy to learn, impossible to master” is a great way to describe this card game.  While the rules are easy to learn, other players are not.  Players are allowed to be cunning so that they are not caught; meaning they can lie, misrepresent and mislead other players.  Players are either loyal to Arthur (warriors) or loyal to Mordred (minions) while Merlin knows all but cannot tell anyone who he is or what he knows. He’s allowed to give hints but since no one will know who he is, they will not know whether or not they should listen to him.  Players have to figure out who is on their side along with protecting their leader all while trying to eliminate the other leader.  5 players minimum, 10 players max.  Best works with at least 8 players.

What I love: That players learn a little about how/why people lie in some situations of life.  They don’t just learn a game, they learn about people and what they will do to get ahead.  Very invaluable life lessons are observed while playing this game!

What I would change:  As an adult, I’m ok with the whole medieval literature characters/stories being used but I’m not sure if kids today are into that.  Maybe a “Lord of the Rings” or even an “X-Men” version could be made.  Really just need two leaders (Arthur/Mordred) that have loyal followers and someone like Merlin who isn’t on either side.  I’m sure licensing is much cheaper for these “Knights of the Round Table” than it is something more presently kid popular like X-Men.  So I won’t judge it too hard on that.