What it is: [Amazon product description] A board game and card game in one! The object is to get a “sequence,” meaning a row of five poker-like chips on the game board. Play a card from your hand, place a chip on a corresponding space on the game board when you have five in a row, it’s a Sequence. Learn to block your opponents by removing their chips. Watch out for the Jacks, they are wild. Strategy, forethought, backup plans and luck are the keys to winning this game, which is probably too sophisticated for children under 7 years old. (But young ones can team up with adults.) 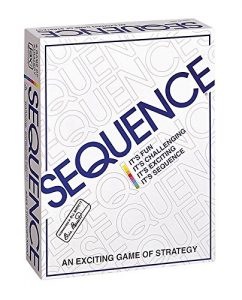 Attention: This game develops lots of attention skills. You need to be focused on the cards in your hand and the cards other players are playing. In addition to focusing on the cards, the game itself usually lasts around half an hour so it helps develop focus over longer periods of time. You also have to pay attention to the number of cards in your hand. After a move, you have to pay attention and make sure you pick a new card before the next player takes their turn or you lose a card.

Working memory: Almost all board games train working memory through concentration and remembering the rules of the game and following instructions. For example, in this game two eyed jacks are wild and one eyed jacks allow you to remove a chip from the board. A player who draws a jack must use their working memory to remember what each jack allows that player to do and then act accordingly. If a player doesn’t remember what each jack does, this could ruin their strategy and chances of making a sequence.

Long term memory: After playing the game a couple of times, players can commit the rules and strategies to long term memory making it easier and easier to play.

Logic & reasoning: This can be a game of strategy. So making a plan and altering that plan based on other players’ moves are keys to success. Deciding which cards to play and which to discard while recognizing patterns will develop logic and reasoning skills.

Visual processing:  The object is to get 5 chips in a row. Being able to see and distinguish the different sequence patterns available amongst the playing cards that can look similar works on visual processing.

Processing speed: There is a lot of information to process in this game and being able to do it quickly will give a player an advantage. In our family, we often set time limits on making moves to encourage quicker decision making and faster processing speed.

What I love: I grew up playing this game with my parents and brother. It’s challenging and takes decision making and planning several steps in advance and it’s still so fun and enjoyable. We could play with our family of 4 or big groups by making teams when we had friends over. There’s competition and strategy and luck.

What I would change: You can be limited on playing this game if you don’t have the right number of people.  It can accommodate a large group, but the group number must be divisible by 2 or 3. For example, it cannot be played with 5 people, which is a common number of people in a family. And I would say it’s not as fun with just two people. It’s better with 3 or more.

I love this game! It’s fun for kids and adults and develops a lot of skills.