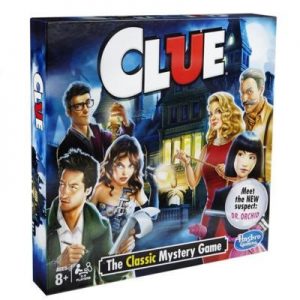 What it is: Love detective games? Clue is one of those classic murder mysteries wrapped up into a board game. In the American version, players must try to determine who killed Mr. Boddy, which weapon was used to kill him, and in which room of the mansion he was killed.

One card from each of the three categories (character, weapon, room) is placed in the “secret file” envelope in the center of the board. Players are dealt cards and given a list to mark off clues as they gather them throughout the game. The player who correctly guesses the three cards in the envelope first (who killed Mr. Boddy with what and where), wins. But don’t guess until you’re sure because an incorrect accusation knocks you out of the game!

What I love: This was a favorite of mine when I was growing up. It’s not really a hard game—it says ages 8 and up—but it’s fun. There’s also a Clue Junior for ages 5 and up, as well as crazy spin-offs, like Clue: Game of Thrones, Clue: The Big Bang Theory, Clue: Star Wars Edition, Clue: Dr. Who, Clue: The Office and Clue: Harry Potter, among others.

What I would change: If you’re playing with a big group of people, it would be better if there were more characters, rooms and weapons to consider.