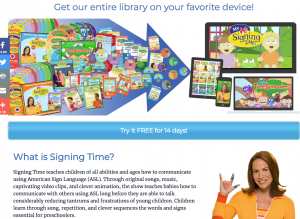 What it is: The Signing Time video series teaches children of all ages and abilities (even babies!) to communicate using American Sign Language through original songs, music, videos and animation. It’s an incredibly effective way to increase communication in babies and toddler and cut down on tantrums.

What I love: This is, by far, the best thing I ever bought for my kids. Before my daughter was two she could communicate with 250 signs. From water and eat to potty and dog, she could communicate her needs and what she saw in the world around her with her hands far before her words formed. My great aunt, who was a kindergarten teacher for 35 years, was worried that my daughter would have delayed verbal development, but everything I had read assured me that just the opposite was true. Sure enough, she was an early talker and reader, and the house hasn’t been quiet in 12 years! (Just kidding. Sort of!) But seriously, these videos are just incredible. The songs are catchy without being annoying and a child who can communicate early is far less likely to get frustrated and throw tantrums.

What I’d change: The videos are a little pricey (though worth every penny).