What It Is: Connect 4 is like a new take on the classic game Tic-Tac-Toe, except that your aim is to get four in a row instead of three. The appearance of the game is a bright blue table top stand and equally colorful red and yellow discs. It is a two player game and is played as follows: each player chooses which color disc they want to play with and take turns sliding one disc per turn down into the slots. The goal is to get four discs in a row, either vertically, diagonally, or horizontally. If children have a hard time understanding the concept of “four in a row” the game box has easy to follow pictures to help them out. 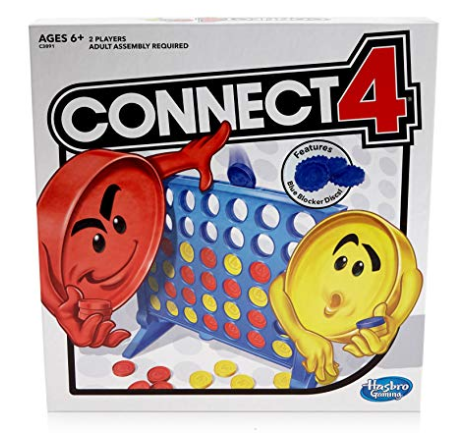 What I Love: I observed three rambunctious 6-7 year old boys play this game. It’s fairly easy to set up for play, and although the box says “adult assembly required,” the boys I observed playing it were able to set it up themselves with ease. This is wonderful if you don’t like having lots of little pieces to try and assemble before you ever even play the game. This may sound like a fairly simple game, but it kept three very rambunctious boys happily occupied for at least half an hour, and one of the boys I watched playing it has ADHD, so for his attention to be held by this game it was a big win!

What I Would Change: It’s not anything I would change, just thought it was worth noting that it is a two player game so if you have more than two wanting to play at a time, it could be challenging. Or take that challenge as an opportunity to encourage patience and how to encourage your friends as they play! Also, it’s definitely more of a kid’s game than a family game as adults may find it dull to play.

Only because of it not appealing more to all ages… Overall, great game for challenging kids’ brains!